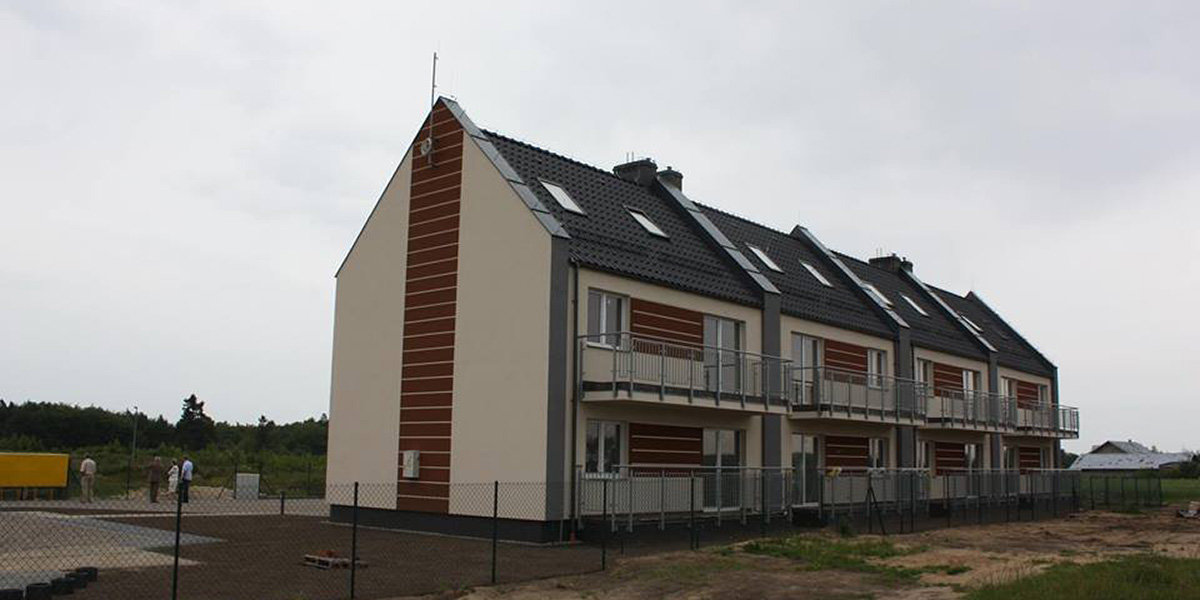 The most interesting Polish example of a bottom-up housing development is the Self-build Housing Cooperative Nowe Żerniki. As a part of a neighborhood, which is meant as a real part of the city: multifunctional, lively, diverse socially and functionally, new developer apartments are being built in various standard, but also social rental housing (TBS), seniors’ home, school, nurseries and preschools, culture facilities, marketplace and a service-oriented street with shops and a church. Three pieces of land in the heart of the neighborhood were given to self-build housing cooperatives. The land was given to cooperatives in perpetual usufruct, so in practice the bidding price is 80% lower than the market price. It was sold by the city in an auction in which commercial entities were not permitted. When choosing the most beneficial offer, not only price was taken into account, but also the concept (screens and visualizations) and the number and quality of the programmed common areas. The condition to enter the auction was a signed agreement on a joint execution of the venture, as well as a plan for financing the investment.

Because the topic of self-build housing cooperatives is not yet well-known in Poland, the Mayor of Wroclaw had decided to send civil servants responsible for the project for a study visit to Berlin, during which they not only visited the already existing objects (Baugruppa), but also learnt their construction mechanisms. Based on the German experiences, the City Hall together with its lawyers designed propositions of an agreement of joint execution of venture, which were then presented to potential partners.

The most serious problems were related to securing the financing of the investment – banks did not know how to treat a group of people joining in a common venture, but the City Hall of Wroclaw provided assistance to give the project more reliability. Currently, two smaller (4 families) and one larger (10 families) self-build housing cooperatives are being built. As a part of their common area, apart from a stroller room, a bike garage and a common day-room for organization of events and parties, which are in all three projects, there are also extra service spaces: a dentist office, a nursery and a café, which will be most likely run personally by the members of one of the self-build housing cooperatives. The costs of construction are still unknown, however it is certain that, because of the lack of a developer and much cheaper land, the apartments will be visibly cheaper than the ones available on the market in that neighborhood.

The second, undoubtedly important, example of bottom-up Polish housing is the Self-Build Housing Cooperative Pomorze, which was created in Gdynia – Wilczno, without any support of the city as an entirely bottom-up initiative. The cooperative, which was created due to the extremely high prices on the local real estate market, had so far (August 2016) constructed 3 multi-family buildings with a total of 24 apartments and due to the large interest in the project there are works on more similar investments. The originator of the initiative, being inspired by the communist-era youth housing cooperatives, erected the first building for himself and his family and friends in 2012. On an inexpensive land nearby the city, based on an available project, there is an 8-family unit with 62- and 82-squaremetered apartments. Also in this case, the most difficult element was getting the financing, because of the lack of procedures for granting loans for multi-family buildings built in the bottom-up formula. According to the cooperative’s estimates, the costs of construction is approximately 20-30% lower than the market price, while the most significant cost is the price of land. The buildings of the Pomorze cooperative are simple – they lack complicated technological and material solutions, are constructed in accordance to a recurrent pattern and are an effect of work of a group, whose main aim was to lower the costs of their own apartment. The cooperative operates as a civil law partnership.

The first self-build housing cooperative in the Warsaw metropolitan area is being built in Konstancin. Eight families plan on building a multi-family building: 2 one-level apartments and 6 two-level apartments in the form of a duplex. The construction is meant to start in the spring of 2018 on a piece of land, which a member of the cooperative had found on the commercial market. Their initiative does not receive support from the local government, but it is assisted by Habitat for Humanity Poland. This help involves:

Members of the cooperative received support from Habitat Poland, as they meet the criteria, which the organization normally sets for all beneficiaries of its renovation and construction projects: they do not have their own housing (they all rent apartments on the commercial market, which often consumes more than 50% of their incomes), are not able to fulfil their housing needs alone (e.g. are not able to buy or build a house/apartment without external help), are actively working towards improving their situation.

Their involvement is strong, as they have: formed a group, found an appropriate piece of land, created an architectural design together with an architect and received a building permit. Because of the limitation of the land, the initial project was modified and the plan for creating a meeting room was abandoned. Members of the cooperative consider transforming one of the attics into a common room, but most likely they will only share the building’s surroundings – meaning the garden. However, they plan on cooperating, as they hope they can organize home schooling for their children.

Currently, negotiations with a local bank are being finalized. Habitat Poland hopes that it will be possible to work out a procedure of financing the cooperative, which can be then duplicated, so that other, similar initiatives could use it in the future.

Articles about self-build housing cooperatives in Gdynia and Wroclaw were written by Agata Twardoch – it is a part of an larger article ‘Bottom-up housing: potential and perspectives’ included in our newest report ‘Housing in Poland. Good practices.’

The photo comes from the Facebook profile of the Pomorze Self-build Housing Cooperative.